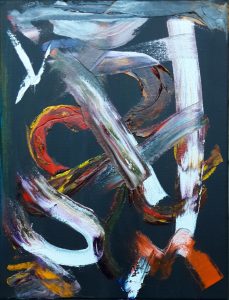 I was out on a walk late yesterday afternoon and twice along the way I smelled honeysuckle. A surprise and a gift – twice. Later, before nine, I was in the basement involved with an eighteen-minute timed-writing session. Channeling words and sentences. One sentence formed in the expression of hope I begin a new oil painting today – Saturday – mostly so I could smell the oil paint. I find there is nothing like it. Not even honeysuckle.

Recently I came across this quote in ‘The Writing Life’ by Annie Dillard – “I cannot imagine a sorrier pursuit than struggling for years to write a book that attempts to appeal to people who do not read in the first place.”

It is a statistical fact that 50% or more of the people I connect with on social media (Instagram, Twitter, Facebook, etc) do not read books; haven’t read a book in a very long time, many as far back as having to read them for a high school junior English project. The same holds true for people I pass on the street, people I commute with on public and private transportation, and fellow shoppers in grocery stores. Includes, no doubt, half my neighbors.

And yet I am forever reaching out to them – here, there, and everywhere – somewhere just south of begging, all positive and chipper and damn near gushing about my new book, be it poetry, supernatural, or some other fictional thing. As if they might buy it. Might read it.

This, yup, is my sorry pursuit.

A few months back, in casual conversation with my artist wife Susan about our chronic conditions of nearly no sales and not much more in the way of interest of any kind, she said this – “We need new people.” I have been thinking on that since.

Also a few months back I started up my Patreon thing, asking family, friends, former co-workers, acquaintances, fellow writers, artists, poets, and sober people to become Patrons, costing them in the big scheme of things basically chump change, to support me on my way, thusly in the process diminishing the slight but consistent beat-down of – hmmm – being ignored? Or – forgotten? I figured I’d have 30 to 40 people sign on right away. However, and I was honestly surprised, the response to my ask was minuscule: my wife, my oldest son, two long-ago high school classmates, and two newer people; An artist I met on-line who lives in Scotland, and who’s painting of a cow I’d purchased and has shipped from the British isles for serious cash. And a Portland woman who had provided nursing services for my step-daughter, and in fact has been the primary “patron” of my art, including my writings, for the last six years or so. Then, coming on board recently, a younger woman I’d had the pleasure of hanging out with and getting to know back in the day when I was a (young myself) high school outreach youth worker. So, you can see, barely a new person among them. Seven people within the umbrella of maybe three or four thousand possibles. Why I need new people.

Beyond the seven just mentioned, there are two other people of primary importance in my life. In fact my wife and those two men, Gavin and Keith, I consider my mentors and spiritual advisers. So I need less than two hands to count all the people noted. In fairness, I have over the years had family and friends and acquaintances and sober people buy books and greeting cards and calendars, even the rare painting. I know who they are and I am grateful for that support. My younger sister Nancy has been the most faithful of them all. But the fact is that there is minimal ongoing support, and while at the end of the day it ain’t necessarily about the money (even when it kind of is…as in what the money means), it for sure means that, right here and right now, I need new people.

It’s not helpful, in that regard and with that as a goal, I have become more of an isolationist and recluse that ever these last five or so years. If you were one of the very few to buy a copy of my newest book, ‘The Automatic Poems’, and read it, a theme running throughout fairly shouts “trees and birds and seacoasts and wetlands are good, people not so much.” Putting it lightly. So I don’t really hang out with people anymore. A few months back I stopped going to “those meetings”. The fact is I’d way more prefer to sit in the back yard with a coffee and (dare I mention it) a book than go to a party. I rarely go to parades, fireworks, political rallies, fox hunts, meetings of the Young Republicans, sufi retreats, church, Greenpeace fundraisers, casinos, VFW dances, or even to the masseuse. So it’s kind of a conundrum, this needing new people thing.

Perhaps faithful devotees of “Couch Surfing at 70” have some helpful suggestions. Which might help, if they’re good ones. Because, honest to God, I need new people.